Home / Lifestyle / General / “The harsh truth is, they thrive off the power…”

I arrived home, high off the thrill of him but well aware I was about to tumble straight into feeling like crap. Why is it such an addictive feeling to be pining after a fuckboy? Which part of us never being something makes us want to fight to be his everything? He’s either on your mind, or you’re on the verge of losing it. It’s an addiction, a cycle, a dodgy habit you can’t seem to shake.

His phone had been lighting up a million times a minute, facedown on his bedside locker. I looked over at him, wondering how many women were at home wondering why he wasn’t texting them back. I didn’t trust him, so why was I here? Was it an obsession? Would I even cross his mind in a few hours time? Most importantly, where on earth were my knickers?

Fuckboys are the most predictable species out there, yet I’m still on the verge of collapse whenever I’m out and about and he sends me a general snap he has sent to 12 other women who are also somewhere mid-collapse. I think men think we’re competing for them… Nah hun, these wonderful women are all being dragged down the same way I am. In fact, I’m going to plan a group brunch date. We’re getting jackets made, planning staycations, watching a series together, thanks for introducing us.

Fuckboys are all over you, then they’re distant, then they’re borderline engaged, and it’s exhausting. And they know this. THEY KNOW THIS. The harsh truth is, I think they thrive off the power. Today you’re his yellow heart, tomorrow you’re “Opened 13 minutes ago.” They’re also funny, hence your absent knickers. Sense of humour is dangerous – Yes I do kind of hate you, yes I will tell all my friends about this joke you just made for the next seven weeks because I will still be in the knots (whilst also crying over you doing a runner, probably?)

Don’t say I didn’t warn you gals, but never fear, we’re all in it together, analysing each other’s hands on his Snapchat story to figure out his current relationship status! 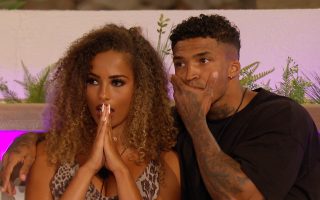