Rant Of The Week: Dublin And Doubts

Despite being the most loud and in your face person, simple things such as ordering a cup of tea in an unfamiliar cafe by myself used to send a fear through me which was worse than three Sundays in a row over the party season. It is only the past year or so that I have started to be more independent and face things by myself. The scariest of this was probably this week when I went up to an event in Dublin by myself, something I never would have done before. It may sound weird to some people, but whenever I go anywhere I usually follow my sister around like an annoying puppy and leave her to do all the organising, I think this was because whenever we were young she was always the one in charge.

Anyway, sister-less yet stylish, off I went and well, lets just say, I’m still here to write this post, aren’t I? I started the day off with a fab skirt and my Fenella necklace to set my day off with an empowering Carrie Bradshaw vibe. I mean, at no point in Sex and the City do I remember Carrie sitting on a bus eating cheestrings, but hey, I’m here to spice things up a little. Also, Carrie could walk properly in her heels, I on the other hand could not, but I’ll tell you more about that later. 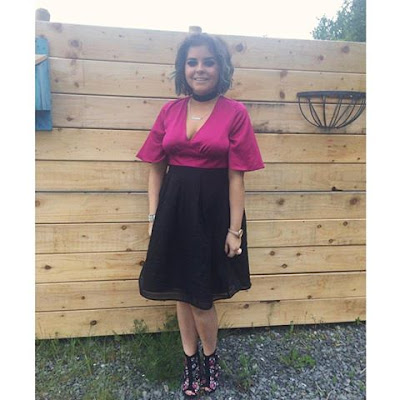 My mum dropped me off to the bus at 8am and I did my usual thing where I use humour to mask my insecurities – “Thanks mum, I’ll text you later, if I ever get there and don’t end up somewhere else!” were the words that came out of my mouth, but in reality my head was shouting “YOU GAVE BIRTH TO ME AND ARE JUST GOING TO LET ME RUN LOOSE IN A CITY ALONE AT 21??? WHAT IF I DO END UP SOMEWHERE ELSE, DO YOU HAVE A SOLID PLAN OF ACTION WITH HOW WE WILL DEAL WITH IT?” I then proceeded to ask her 15 times if I was getting on the right bus, and she was quick to remind me that the big “Dublin” sign on the front slightly gave it away. Oh.
So when I got on the bus I was quite comfortable because the bus driver was very friendly and I actually had packed cheestrings for the journey. I didn’t even need to worry about my iPhone’s crappy battery because my mum gave me her iPod (my one is broken and I can’t travel without music.) So anyway, I dozed off listening to Jason Mraz, Bruno Mars, Keane, Lionel Richie, the occasional Christmas Song and Kenny Rogers (thanks mum) when I was in a complete dreamlike state. All was fine until the crucial bus moment –  a moment that still turns my cheeks bright red with embarrassment. I woke up, face squashed up to the window, mouth wide open, the possibility of a little bit of dribble sliding down the window, and I turned to my left, looked out the window to see a school bus of kids staring back, waving at me. WAVING AT ME WHILE I WAS ASLEEP. There they were, watching me dream about Kenny Rogers. They were, in the words of Peter Kay, bold as brass. If they took pictures and I end up getting turned into a meme, I am so done! Right, unfortunately I can feel my cheeks starting to heat up again. MOVING ON.
After that minor inconvenience, everything got much worse to be really bloody honest. My beautiful heels were squashing my feet and I was unable to balance my body because all my weight seemed to be falling onto my toes – 47 cheestrings later and it’s safe to say I had several regrets, I was definitely lighter when I got on the bus. I was half tempted to google “How to lose cheestring weight quickly” but, as usual, my signal was so bad. The worst part about stumbling in heels? Trying to play it cool when you know very well at least five people are waiting in anticipation for you to face plant the rain soaked street. Yes, I know, the weather has been fab all week, not when I decided to go to Dublin though. On top of all this I was trying to make sure people didn’t think there was a full moon in Dublin at 11am when my skirt kept creeping upwards. Excuse me skirt, I kindly brought you into my life, so can you not?
I then got lost after using the toilet, I was completely thrown, my plans to be there by just after 11:00 were soon blurring into 12:00 on my watch and I had no idea where I was going. Google Maps told me many times that I had reached my location, but that was 100% wrong unless my location was supposed to be some (probably drunk) man who kept saying “You’re breaking my heart!” Eventually though, I arrived at the event… This heartbreaker was in the building, bitchesss. I also had a fabulous time and all was absolutely splendid – so many laughs were had and so much style to indulge in!
I took off my heels when it was over and ended up happily breezing through the city for the next hour or so completely pain and stress free. I even got a spot on the bus home I wanted, which I had been panicking about earlier too. However, of course, this being a day in the life of Fenella Fox, mirroring a chapter of Bridget Jones Diary, I got off the bus ready to pop into another event and managed to land in a puddle that splattered mud all over my bare, freshly shaved legs. The only positive of this was it probably evened out my week long tan which was now just half fading chunks. Sun kissed always turns into sun vomit eventually and there I was trying to balance whilst I wiped clean one leg, unable to sit on the bench beside me which was empty apart from the remains of when the heavens had opened a few minutes before.
Did I survive travelling alone? Yes! Could I do it again? Definitely! Would I do it again? Not until Google Maps gets its life together – Mate, we weren’t even kind of close to where we needed to be. I also wouldn’t use the loo again because it threw me off and I lost all sense of direction when I took a right into that cubicle of doom. Don’t get me wrong, adventures are endless excitement and the highlight of our lives, but there’s no place like home! Saying that though, risky days often turn out to be our proudest memories and of course I feel so proud of myself now because I did it, even though I doubted myself to begin with.
PrevPrevious Blog
Next BlogNext