What I Really Think About Women’s Body Fuzz

Okay it is only half 11, and my day hasn’t been off to a great start so far. Firstly, I woke up after having a dream that Ed Sheeran was my best friend and fell in love with me so was fairly distraught when I realised he has no idea that I exist, and secondly, I read an article by the Daily Mail which had me questioning mankind.

The top of the article said “From the moustache to bikini line, what men REALLY think about women’s body fuzz and how they should be dealing with it” Dealing with it? If you can’t handle us in our true form then we will be dumping you for being so shallow and having such a false idea of the “perfect” woman.

Get The Gloss asked males what they thought about women having body hair and all I can say is lock up your daughters because there are some seriously inconsiderate people out there. Not all of them though, of course. Some said: “There are more qualities to a woman and her body hair is one small aspect. It can be equally attractive for a woman to be au naturel and be confident enough to not conform to opinions and trends in society and glossy magazines.” and “I guess I like something there, like a line or runway type thing. I prefer a bit of hair because otherwise it’s too childlike. Ultimately though, I don’t really care that much.” PREACH!

I’m not saying women should be a certain way, or going on a hate rant against men, I just think people are insecure enough without being expected to look like Barbie and Ken. Realistically, women aren’t supposed to be completely bare, if they were, no hair would grow to begin with. Don’t get me wrong, I love the feeling after I’ve just shaved, no matter what area. However, we just do not have the time to do this every single day.

In an ideal world, all men would look like Zac Efron or Channing Tatum while also having a heart of gold, and a voice like Ed Sheeran, but we don’t pressure them about it. Being told to remove all of your body hair is like telling men to go to the gym everyday because they have to look a certain way. Some people said women shouldn’t have hair because they see it as a masculine feature. Muscles could also be considered masculine, but many men seem to be lacking that feature, or are they hidden under your excessive amounts of manly body hair? These stereotypes have been put there by people and society, they aren’t real. Women don’t go on a hunt for a man with a moustache or particularly hairy chest, we want a man who is going to respect us and love us for who we are, that’s all. We don’t want a Gaston, we would choose the Beast everytime (I know he’s obviously more hairy, but you know what I mean). 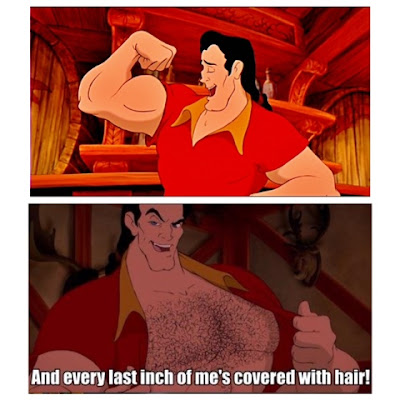 Times have changed, and so have the ideas of masculine and feminine. I grew up being completely insecure because of hair on my arms and hair on my face, but as I got older, I realised all women have that, it’s completely normal. I went through a phase of waxing all the time to get rid of this hair but now I feel a lot more confident and comfortable in my own skin. I used to take it really personally and get upset if people commented on it, but now I just laugh it off because I don’t want to be around people who make fun of it anyway, they’re not true friends.
Women can’t help the amount of body hair they naturally have, it doesn’t make them any less of a woman. Yes, I love the feeling of having just shaved my legs, but I do that for me, not for anybody else. If he doesn’t love you for who you are and tries to change you, he doesn’t deserve you to begin with.
PrevPrevious Blog
Next BlogNext