Right, now I’m all for lazy days and chilling out but there comes a point when enough is enough. For some reason, people going out in pyjamas really really annoys me. It’s like, girl, what you at?
I was in a chipper recently and a woman came in wearing pyjamas. Firstly, it wasn’t even that late, and secondly, it takes like thirty seconds to put on a hoody and pair of tracksuit bottoms, you may think its pointless but those real clothes can instantly boost you from a 1 to a high 7. Just saying.
I love wearing pyjamas but I just think wearing them in public is really lazy. Put some clothes on love. The only time I would do this is when I’m going into town at night and know for a fact I won’t be getting out of the car.
I have plenty of fab pyjamas, but does that mean I like wearing them on the runway of everyday life? Of course not! I like to make some bit of an effort. Hair and make-up doesn’t affect me and neither do really casual clothes, but pyjamas are just something else.
This is one trend that I will not be sucked into, it all needs to stop now before it takes over the next generation. And people think selfies are bad, can’t wait for dressing gown and slipper ootd’s… 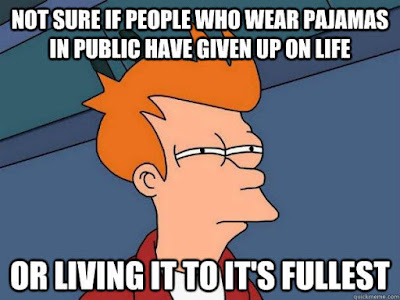 When The Past Is Still The Present

A Trip To London!

Fighting Through The Rainy Days