Home / Lifestyle / Is Beach Life Really For Everyone?

So a few days ago I was sitting on the beach surrounded by my embarrassing parents and swarms of hyper demon children and it hit me how much I really would not like to live by the sea. Sure its nice to go to the beach when we are blessed with nice weather and I do enjoy it occasionally, but I don’t get the big deal like some people do, I mean if I lived by a beach I suppose its good in some ways because I could pass boring evenings by removing the excess sand from my bikini top and in between my toes which has built up during the day and build many sandcastles in my room until I have a huge sand kingdom of which I would been the queen (obvs), but apart from that it doesn’t appeal to me too much. I have spent many Summers in Cornwall by the sea trying to eat my fish and chips while being eyed up by vicious, flesh eating seagulls who have in the past attacked by parents and stolen my brothers ice-cream. The signs that say ‘Please do not feed the seagulls.’ is not respected by many people and people do have sympathy for them so continue to feed them. I don’t. They are evil and I am hungry. So many days have ended in the past with me standing in a busy fishing village having an emotional breakdown about how I refuse to eat outside incase I get attacked (or eaten whole), but in the end I never win because my parents get moody and I end up starving or taking home chips for later (which go soggy by the time I get to eat them, vom.) I also hate that beachy feeling of your hair when you get home and you feel like you could shower for four days because of sand, salt and seaweed. Some people may say that I complain too much, but unless you are Danny Zuko then don’t expect me to spend many Summer days on the beach with you! 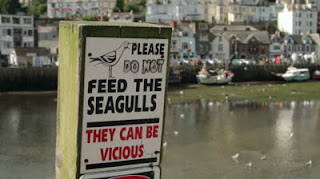 Rant Of The Week: When Clothes Are Put In The Sale Section By Accident

Rant Of The Week: The Meaning Of Life