Home / Lifestyle / General / “This was my big moment, finally. PROGRESS.”

I chugged back half of my pink gin and lemonade as I saw him walking outside. “Oh noooo!” I thought. I had no idea where we stood anymore, we were texting on and off, I was neither over him or under him. Before I had a chance to tell my guardian angel that I still presumed he’s a prick, we had made eye contact. I looked around subtly as he made his way over. Was there a supermodel standing behind me that I hadn’t noticed yet? Potentially. Was I about to nervous vomit up the cocktail sausages I had eaten at a party earlier? Probably. A few seconds later he was standing in front of me, he was so confident about it I half wondered if he was an illusion and I had officially lost the plot.

This was my big moment, finally. PROGRESS. It was now or never, I knew this night could end with us leaving together after months of chemistry. I was shaved, tanned and moisturised from head to toe. I had my favourite perfume drowning places that my good perfume should never have to venture to, my knickers were no bigger than a piece of dental floss and I had so much setting spray on my Huda Faux Filter was ready to last until the same time the following year.

Just as I was gazing like an idiot into the horizon of his fuckboy eyes, I realised that my dental floss knickers were a completely unnecessary discomfort for tonight. Two of his friends made their way over like a whirlwind, making basic small talk with us, obviously not realising I had been playing “Let’s Get It On” in my head for the past five minutes. Some minutes later, one left, but one stayed. I spent the next twenty minutes politely nodding to drunk conversation, I knew each moment was precious as I visualised a new underarm hair sprouting with each passing second. This was not my big moment, we wouldn’t be getting it on, I needed to get out.

The nerves disappeared, all the butterflies headed elsewhere, and he was giving me the “I knowwww!” eyes. I went home alone with my dental floss knickers, knowing very little about his bedroom and bloody everything about his mate’s entire work roster. 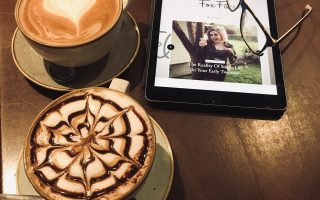 A Few Of My Favourite Things About Autumn

“With elegance, with grace, with your skirt tucked into your knickers, whatever. You just have to do it…”