Should We Really Be Rooting For This Reunion? 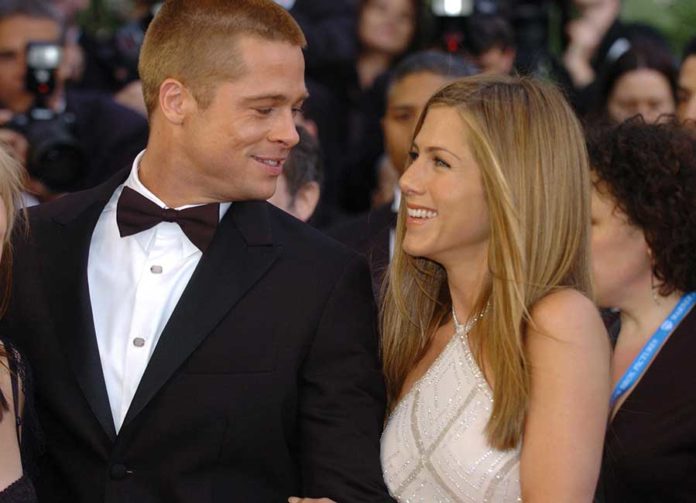 Brad Pitt and Jennifer Aniston are probably soulmates. Let’s face it, it’s basic Hollywood science, those two were destined to be until it all fell apart and broke hearts across the globe. Fight me on this if you want to, but it’s the truth, people. They were Hollywood’s golden couple… the Ryan Reynolds and Blake Lively of the 00’s.

So, how did I react to all the swirling news lately that they are becoming pretty damn friendly again? Of course, like the rest of the world, I completely fed into the fairytale aspect of their relationship, prayed they both realised they’re destined to be, and read every article I could find praying one of them held sources telling us that romance is blossoming once more. Aaaand that’s where I am running into a few problems. Let me explain…

So, take away their beauty, the bulging bank accounts, characters they’ve played that we’ve loved, that episode of Friends he appeared in, and all of the cute early 00’s pictures of them we have ingrained in our brains, and we are left with something very relatable and relevant – an absolutely terrible idea. I’m talking that quickie with your ex because it’s oh so nice, oh so familiar, but in the rush of the romance you’ve forgotten that he’s oh, so annoying. Hollywood has hyped this love into something amazing, but the reality is Jen’s group chat is probably hopping at the moment with memes about how he still ain’t sh**.

Now, I have no idea if Brad and Jen will rekindle their love. Perhaps they are just friends, but that still leaves the question: can you ever really be just friends with someone you once loved so much? Will they ever be able to go for a coffee without the media pouncing on them? Will I ever be able to stop wondering what if he wasn’t such a dope when it came to loving me? (obviously I am referring to my own exes here, but if you presumed I was still talking about Brad Pitt, sure let’s go with that!) And if there is more to the relationship, can they be truly happy and free from any bitterness? It’s a hard one to do, the spark and physical attraction is still there, yet you still remember his exact words from June 7th 2015. Look, she’s a fantastic actress, great jawline, but we’ve all had an Angelina Jolie in our lives at some point, haven’t we? And sure, Brad was hugely to blame there, being married to Jen and everything, but it’s still gotta sting. I’m guessing her must-watch movie list has become significantly limited.

If my soulmate theory is true, perhaps like many things in life, it was a matter of timing. However, sadly, it’s hard to fully put the past behind you when there’s a lot of hurt there. If they were soulmates, would they have crumbled as they did and would there be another person in the equation? Maybe they’ve moved past it now because perhaps it is possible that people change, but there’s also the possibility that they’re both experiencing fresh hurt and are searching for a familiar comfort. I’m not saying I’m a relationship expert, but my phone did buzz with a text from my newly single ex last year after not having contact with him since about 1883. I know the deal, folks. You can slide into my inbox hun, but you ain’t sliding in anywhere else.

As a final thought… before we all get sucked into the hype of building this relationship up in our heads (like me in the first paragraph of this post… I’m excited okay??) if Jennifer was my friend, would I be rooting for this? I’m talking breaking this down to the basics of normal life – So Jennifer is now 24, working in a clothes shop, 14 quid in the bank, keen lover of pink gin, still growing out her heartbreak ‘new hair, new me’ fringe, and is no longer following Brad on Instagram but occasionally creeps via besties. In this real life scenario, is Brad the man she needs to leave behind because he was the one who broke her heart, or will they always have that magnetic pull because thanks to fate, he’s always taken up that space in her heart?

When it comes to love, maybe there are no right or wrong answers. In the limelight or not, some people will believe you’re the only one who can choose your own happiness, and other people will say you’re a fool to run back to a familiar red flag. Yes, I still believe Brad and Jen are soulmates, but I can’t help that part of me that also believes the one that got away should stay where he is. None of us have quite worked out what soulmates means yet, nor will we ever, so maybe it is possible that souls can click without needing to eternally click together. I just can’t work out if we’re rooting for the actual romance, or just rooting for the thrill of Brad Pitt and Jennifer Aniston hotting up magazine covers once again because their break up was so high profile and we all romanticise people who have such history. On the other hand, who are we to judge two people who can’t help but love each other? Especially when they’re simply the best couple ever to walk the earth??

Whatever happens with our beloved Brad and Jen, I just hope history doesn’t repeat itself because if I’m being honest, I am only just starting to let go of the grudge. TEAM ROSS. Er, well actually…

Oh, I know I didn’t actually come to a solid conclusion in this post, but if you’ve stay tuned this far then I can conclude one thing – Brad Pitt is ageing like a fine wine. You don’t have to remarry the man Jen, but a little after party action couldn’t hurt.