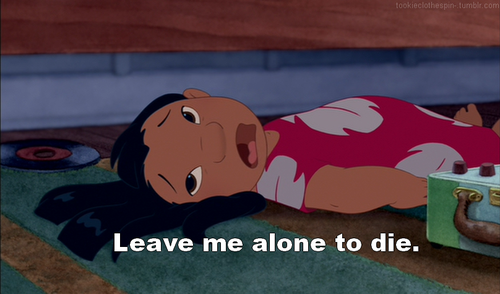 U ok hun? Being ghosted kinda sucks. Well actually, it sucks big time. If you’ve been freshly ghosted and aren’t sure what to do next, I decided to put together some steps for you to take. Now I’m no expert, it took me many years and embarrassing moments to decide this was the better route. So to save yourself any extra trauma, give them a read.

Right, don’t panic until you’re a few days in, because I know I tend to panic after about six hours. This first panic has probably come from other bad relationships and doesn’t necessarily reflect on him, so chill out. He honestly could be busy. Until you’re certain things have gone completely downhill, stay strong boo.

Tell your mum and your mates

This can only be done when you’re fully certain because when you tell the squad, there’s no going back. Your friends will do the usual analysis of his character, investigate his background and upbringing, and dig through every social media account he’s ever signed up for. And your mum will be there to remind you he’s no Brad Pitt, so you should have opted for his mate in his profiler. Bless her.

Now I know it’s easily done, he’s disappeared off the radar so the obvious thing to do would be demand an explanation and completely lose the head. Do that if you want, but chances are he’ll be absolutely delighted. If he’s ghosted you, it’s likely he’s quite self-absorbed because he doesn’t have the decency to think how this might impact you. I used to chase down the men who messed me around, but I just can’t be arsed anymore. Leave him off, the good guys won’t ghost you to begin with and the rush you get from getting mad will be short lived because when it’s cooled off, nothing will have changed. He’s probably still a bit of a twat. Sorry gal.

If he’s majorly pissed you off, he’s gotta go. Are you prepared to watch his romantic antics with other women evolve through social media? Absolutely not! Move on with your own life, you don’t need to follow his. He’ll soon become a “Oh yeah remember him!” moment.

I read a thing the other day that said “Overthinking always leads to sadness” and honestly, it’s so true!  Your mind will create problems that aren’t there if you keep thinking about something. You aren’t a mind reader, you don’t know why he did that. Think of it as a blessing, you’re destined for something better and he was holding you back from that.