I am sure I have talked about this topic before but I was trying to think of topics that I think you will enjoy reading and might give you all a lift or some advice and this was one of them so if it helps even one person who is going through this or something similar – great! By the way, I’m no expert. I’m just offering you advice from what I’ve learned from my past mistakes and how getting kicked out of nightclubs for crying and falling over, or going on Tinder and super liking the ex you’ve just been dumped by three days after the breakup because you need a cuddle is NOT a good idea no matter how encouraging your friends may be about it. Anyway, that’s enough about me, moving on…

The truth is, no matter how much advice you get, breakups are hard. In fact, they are bloody crap. You feel like your heart is being pecked at by an angry ostrich and you just want to fire a load of tomatoes at your ex’s house until you feel somewhat better and can bring the pity party to a close – Okay people, that’s a wrap, time to go home. I don’t want to tip toe around the truth and tell you you’ll be fine and will find someone better, I mean, you will, but when you haven’t reached that stage yet there are a lot of nitty gritty breakup details to take in to help you get where you need to be.

For many of us, breakups are our first taste of the feeling of a broken heart and sometimes you can feel like you will be trapped in this lost love limbo forever. The truth about breakups is that people don’t often talk about how much they hurt. We all shy away behind selfies to show we’re getting on with our lives when in reality we’re heading home to indulge in the Notebook for the 4th time this week. The bad thing about that? It’s only Tuesday… No, but seriously, you can try, but at the end of the day you can’t filter a broken heart.

If you lot think you have it bad, just remember that I am here offering advice and admitting how much of a blubbering mess I have been during breakups when it’s quite possible that my ex’s are reading this to see if I have tried to tear them apart (oh hey hun, you might want to shut down the laptop now…) Nah, I could try to ruin lives but the majority of these lads have seen me doing weird things like awkwardly dancing and shaking the bum I don’t have as I’m getting dressed or plucking those random boobs hairs (just me?) and I live in a small town where rumours spread quicker than my thigh flab when I sit down, so eh, let’s leave the slagging until a later point in my life when I’m more settled, or dead.

Firstly, the worst thing you can do during the raw stages of a breakup is dwell on nothing but the positive side of your relationship. I mean you will definitely do this because it’s a natural way to deal with a loss, but no offence, if you have broken up things couldn’t have been that swell. So yes, I’m sure he watched your favourite movie with you once in candlelight and it was all very romantic but I am here to remind you about the annoying foot tapping he kept doing or the way he was loudly rustling a crisp packet when Jack was no more than a dying glimmer of hope floating to the bottom of the North Atlantic. Did he watch this movie spontaneously or because you begged for weeks? Did he set it up in the garden on a summer’s night surrounded by fairy lights? Nah, all you got was him trying to get those last few salt and vinegar crumbs at the bottom of the bag at the most inconvenient time everrrr.

Secondly, when it comes to any forms of social media… delete. Delete. DELETE. I do not say this lightly. Ignore your friends who say “Don’t give him the satisfaction,” you’ve already given him plenty of that during your relationship just by being present in his life so adding a little “Cya!” to the end can’t possibly do any damage. Nothing good comes from creeping or him popping up in your newsfeed every 17 seconds as he is trying to prove how great his life is without you. Spoiler alert: His mum took that group “lads on tour” photo and Paul didn’t even make it past pre-drinks.

You will literally overthink everything. EVERYTHING. Porridge in that picture of his kitchen? That family always ate cornflakes, so who is this new porridge-eating woman on the block ready to steal my spot in his life? DELETE. I honestly never creep on ex’s, I usually block them until my bitterness dies down a little bit a few months later and then they get upgraded by getting unblocked and earn the privilege of being able to creep on me again as someone who has only been unfriended. My ex’s could honestly be dating Rihanna or have grown a world record beard (doubtful) and I wouldn’t know about it. Girl, focus on yourself and leave him to eat the porridge if he wishes.

Third, do not go out this weekend in your new €19 Penneys dress to try and make him jealous. I’m sorry to break it to you, but take it from me after many failed attempts at this plan – it won’t work and you aren’t ready. Honestly, you need time to heal. Seeing him will only upset you and you will spend your night wondering what he’s doing and who he’s with. Or he actually will get jealous and you end up going home with him. Either way, the breakup will still be just as painful the next morning whether you’re waking up in his bed or your own. What I’ve learned is you need time to absorb your unfortunate, blubbery, no makeup days in order to make your inner self feel permanently done up again.

My last point is, it’s all routine. A lot of the reason why you’re hurting so badly is because your plans have been messed up, your routine is changing and his name won’t be in your inbox anymore. Welcome change rather than fearing it because you can just create new routines and new memories with new people. I can promise you, even though it seems unbelievable now, it will get to the point where you can listen to people talk about him again without needing to block your ears and you will walk past him and even though you’re now both living separate lives, the memories will come flooding back but you’ll no longer feel like you’re drowning.

I really hope this helped gals! And on a lighter note, when you’ve dragged yourself out of your tear and tissue filled bed and got your life back together a bit, let’s put things back into perspective here – Jennifer Aniston had to get over Brad Pitt, so I’m sure you can get over John without being too pathetic like me. 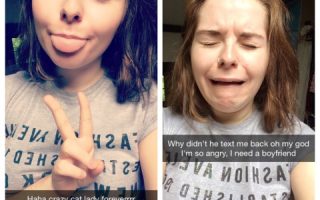 How To Know If You’re Friend-Zoned On Snapchat

Rant Of The Week: The Glitz And Glamour Of Christmas Nights Out

Rant Of The Week

Rant Of The Week: That Sunday Feeling