They’re a poisonous species we can only assume were sent from the depths of hell to sabotage our happiness and romance, right? Or at least that’s what we usually think about ex-girlfriends, but are they really as bad as we think? The answer to this question – no. Ex-girlfriends are not as bad as we think. They’re like dogs or snakes, they could turn at any point if angered, so just don’t anger them. Simple. We assume they are awful creatures until we ourselves become the ex-girlfriend and realise they’re just your average fragile hearted girl who dances around the kitchen, eats too much chocolate and watches endless reruns of Friends everyday.

At some point down the line I ended up becoming that demon spawn and I’m sure many of you girls have too. And no, I don’t mean I lived up to the name, I just mean I was no longer the apple of his eye. All that wondering about were we or weren’t we was soon shut down when the new girlfriend bomb was dropped on Facebook. A bomb so violent it shook me to my very core and probably made me gain a good ten pounds of nutella weight within the space of three days. Somehow during that time period, I went from an average 19-year-old gossip and tea loving girl, to a huge threat to mankind and new relationships. Contrary to my earlier belief, ex-girlfriends do not spent all day long in their office giving birth to evil plans (well not all of them) , and no, they do not send their minion best friends out to ruin lives (well, only the odd Saturday night three tequilas later…)

We don’t want to destroy your life or steal your man, nor do we post hot selfies to annoy the life out of you. Granted, we do pester our friends for the answer to the unanswerable question: “Why her?” but isn’t it just human nature to wonder what qualities you’re lacking? Surprisingly, other than that, ex-girlfriends rarely insult the new girlfriend. As a matter of fact, as soon as the love of your life moves on, every girl he comes within a five metre radius of suddenly turns into Mila Kunis or Michelle Keegan. It’s a curse really. I admit, some insults are thrown around, but it comes from the loyal bestfriends who just always know what to say when you’re left speechless.

Becoming the ex opens your eyes to the other side. The new girlfriend may hate the ex, but the new girlfriends all seem to forget that they turned up terribly unexpectedly in the ex’s eyes, like a fruit scone when you asked for plain. Is the real problem here the ex, or the f***boy playing both of you? Girlfriends old and new, I salute you, girl world is a feisty place! 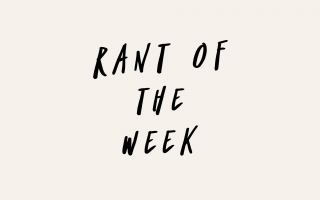 Rant Of The Week: Sleepless Outside Seattle

Tinder: The Trials And Tribulations