Interview with Alfie from Hudson Taylor

I am delighted to announce that a few days ago I was lucky enough to see Hudson Taylor in Dublin. For anyone who doesn’t know who Hudson Taylor are, (of course you do though) they are Irish brothers, Harry and Alfie. Their debut album is called Singing for Strangers.
I approached Alfie and asked him if I could do a short interview with him for my blog and he was kind enough to agree.
Here is my interview with Alfie 🙂

Q: What inspired you to get into music? Have you always had the interest?
A: No not always, myself and Harry started playing music when I was 15 and Harry was 16. He had been playing music his whole life. I suppose what inspired us to do it full-time was just the enjoyment of it all, we enjoyed playing together and we really enjoyed writing songs and stuff like that, so that’s just kinda what kept us going really.

Q: Are you really close? Or would you have your days where you kill each other like a normal sibling relationship?
A: We’re really close. We feel so lucky to get along so well. We work really well together, we’re best mates, like we’re never alone in a situation, we’re in the exact same boat. So, when it comes to working out a problem or anything like that, we’re two people doing the exact same thing, rather than a solo act. We haven’t killed each other in a long time, sometimes we bicker about food but that’s only who gets the last crisp or something, you know.

Q: If you could go back, is there anything you would do differently?
A: Ah plenty of things but, no regrets. A lot of things just happen for a reason sometimes and it’s all part of the journey, part of the, I dunno, the surprise of it all I suppose. It’s all done now.

Q: How did you become so well known?
A: A collection of things. We started putting stuff up on YouTube, started doing a lot of busking, promoting ourselves on our own, signs when we were busking, all sorts of things. Just writing as many songs as possible and doing as many gigs as possible. 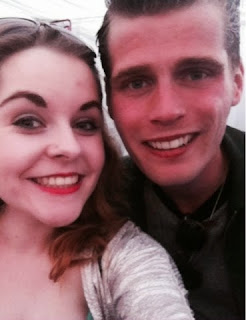 Oh, we love these guys! Check out their album Singing For Strangers 🙂