Rant Of The Week: She Who Laughs Last, Laughs Longest

When you’re in your teenage years, there comes a point where you are ready to leave school because of all the idiotic people you encounter that are around the same age as you. However, when you’re 20 you realise these people are still there, just pushed further into the back of your mind and hidden behind Facebook comments and a ridiculous Tinder bio. For example, what happens to the ‘lads’ you never even knew to begin with? Since when did ‘being a lad’ mean ‘being a bully’ ? Will they continue to fish for likes off each other and laugh at their own jokes when they’re married with three kids and a mortgage? Will they still continue to upload screenshots making fun of other people while on the hunt for some meaning in their lives? I haven’t got all the answers but I can assure you now that as life goes on ambition and happiness will consume you more than the few negative comments.

The only thing to do when people make fun of your passion is to work on that passion more than ever. Turn that dream into a reality and that passion into your life. Chances are, they won’t pass you ‘spinnin’ in their little car shouting stuff out the window while you’re surrounded by the skyscrapers of New York City or the Great Wall Of China, and eventually your Facebook friends list will be so full of the wonderful people you’ve met on the journey of fulfilling your passion that one tiny negative comment from a person you barely knew five years ago will be lost on your newsfeed amongst all the good things. Trust me, there comes a point where pictures of people kissing just doesn’t have the same hilarious element to it as it did when you were 12, and being cowardly enough to make fun of people on social media is a sign of a bad nature, not popularity. It takes a lot of courage to put yourself out there and be brave enough to do what you love, so instead of trying to throw rocks onto somebody else’s path, why not support them on the journey which is probably a big enough struggle for them already without your input. Are people intimidated by a girl with a bit of fire in her belly and a lot of ambition, or just jealous of it? Don’t people realise that I already have my dad as my number one male supporter and as the biggest Daddy’s girl going that always has been and always will be good enough for me? 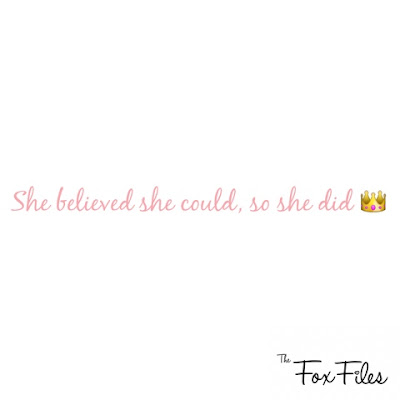 When all is said and done and a mindset finally matures, the laughter will have worn off but the regret will still be there. And don’t worry, it may seem like loads of people are laughing with them, but that’s called weakness and being a sheep, exactly what their whole group is probably made up of which is why they get so much support, I mean, how often do you see just one sheep standing alone in a field? Lets just hope the current sheep are all prepared to cheer their own kids up and hold back the anger when the same thing is done to them by a future generation of animals. It can be difficult, but try not to cry now because you certainly won’t be crying when you’re doing what you love surrounded by people who constantly support you and care about you. The negative people won’t even cross your mind, but you will still cross theirs by proving them wrong, rising above the nastiness, and choosing to slay by the day. Oh sorry, did you say something negative? I can’t hear you underneath my bouncy blowdry and killer high-heels.

Yes, I do apologise as I am aware this was a proper rant, but as a girl who has come under fire simply for being a lover of writing and fashion I have no choice but to share my thoughts on the topic, put on my favourite outfit, and just keep going! And that is exactly what you should do too 🙂 School doesn’t last forever, but the opinion people have of your personality does so use it wisely and nicely.